“This article was previously submitted on http://www.medium.com, but it was also re-published on http://www.wordpress.com. I thought it would be interesting to see how many readers read it while it was on Medium.”

Medium.com Analytics for Are African-American Women An Endangered Species? 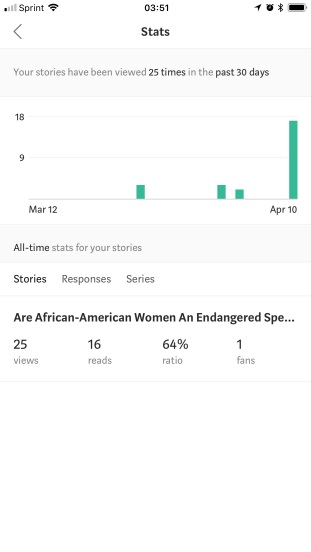 After publishing my article, Are African-American Women An Endangered Species? on http://www.medium.com I posted the announcement that I’d written it on Facebook, Twitter, Tumbler and LinkedIn. I also tagged it with Black Lives Matter as suggested by the Medium site. I think if I had added more tags, to the piece, such as African-American women, domestic violence, education, and racism, I would’ve garnered more readership.

When I analyzed my stats, on medium.com, from March 16 to April 14, 2018, it said that I had 27 views, 17 reads, a 63% ratio and 1 fan. The views mean my “story had been read 27 times in 30 days.” I have over 50 Facebook friends, 65 followers on Twitter, 1 follower on Tumbler, and 88 followers on LinkedIn. I believe that’s where some of my readerships came from. If I were more proficient withtheSnapchat and Google Analytics app I feel I would’ve gained even more readership online.

If I examined the reason I obtained the readers I did, I’d say it has to do with the compatibility with news trending stories about harassment, racism, violence against women. To make the piece stronger visually, I could’ve used the Photoshop Express app to add a few accompanying photos from my Camera app. Statistical graphs and a sidebar of resources for readers would’ve also made it stronger and user-friendly, thereby ensuring more readership overall.